‘Til Death Do Us Part?

So many famous marriages have been destroyed by the glitz and glamor of celebrity life. While Johnny Cash and June Carter Cash weren’t your average celebrity couple, did they truly stand the test of time? 50 years have passed since the iconic country singer and his talented wife tied the knot. Cash and Carter’s fiery passion proved that you can be famous and maintain a long-lasting relationship. However, it didn’t come without its fair share of challenges along the way… 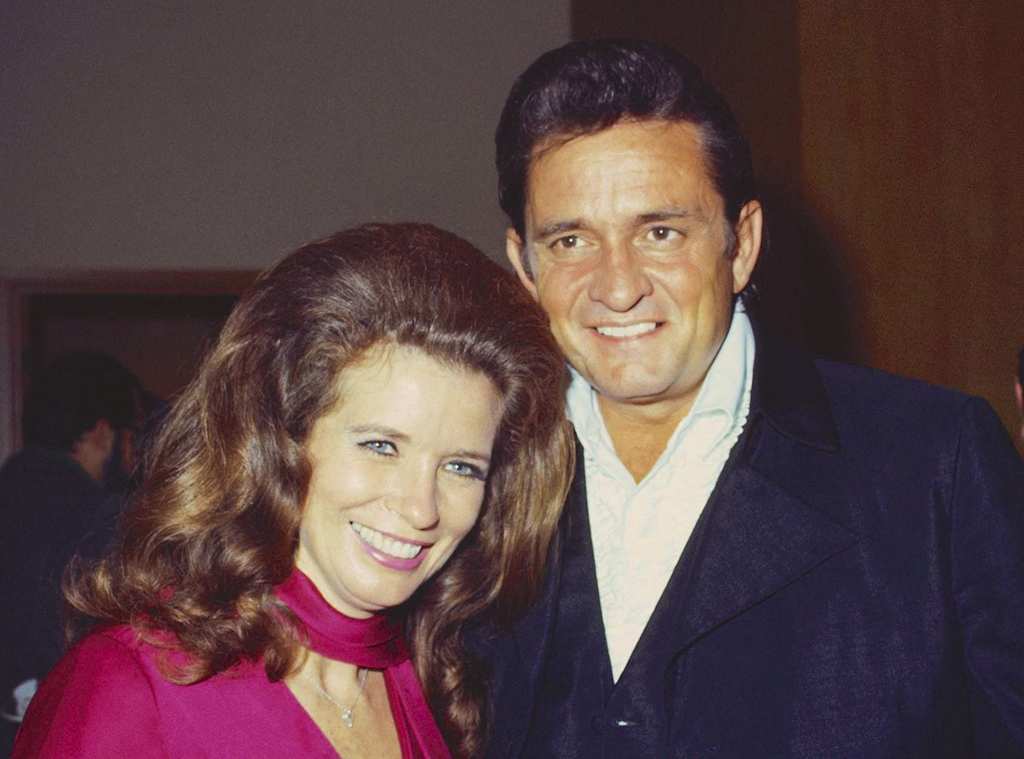 Elvis Set Them Up?

It was none other than the King of Rock n’ Roll, Elvis Presley, who was responsible for Cash and Carter’s fateful encounter at the Grand Ole Opry. June was actually a backup singer for Elvis at the time. However, she was simply in attendance that evening. “I first heard of [Johnny Cash] through Elvis Presley,” Carter said. “Then, one night backstage at the Opry, this man walked up to me and said, ‘I want to meet you, I’m Johnny Cash.'” 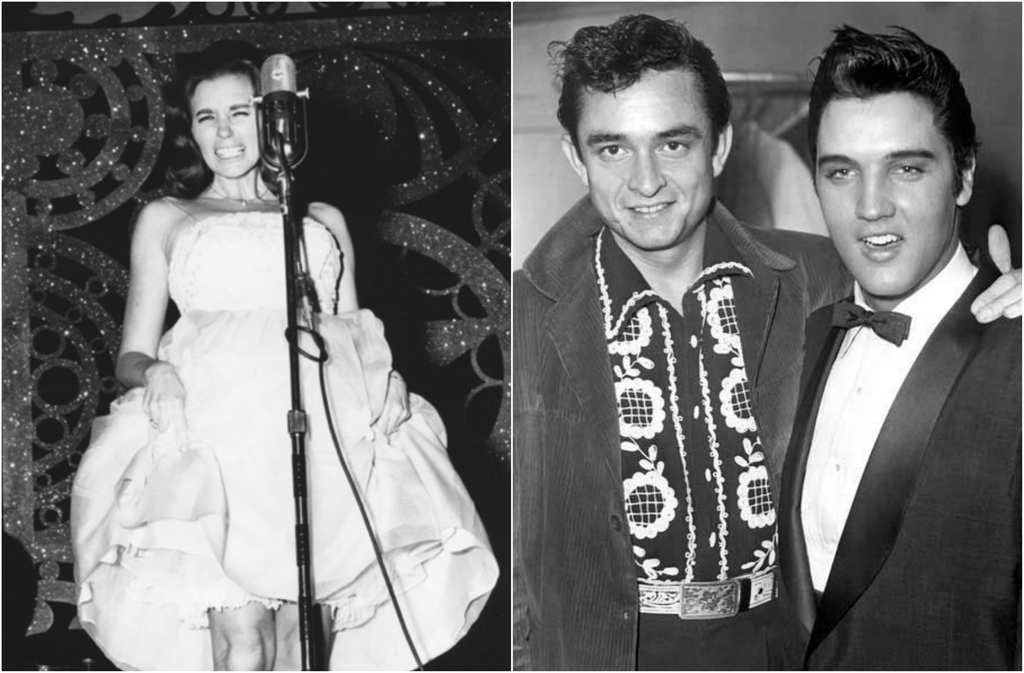 June Carter had every reason to be apprehensive about rushing into another relationship, especially with a rock star like Johnny Cash. Having already been married and divorced twice, the last thing she wanted was to go through that a third time. Carter’s first marriage was with honky-tonk singer Carl Smith, who she had a daughter with, before divorcing him in 1956. Just a year later, she tied the knot with former football player Edwin “Rip” Nix. Once again, the couple had a daughter but divorced a decade later. 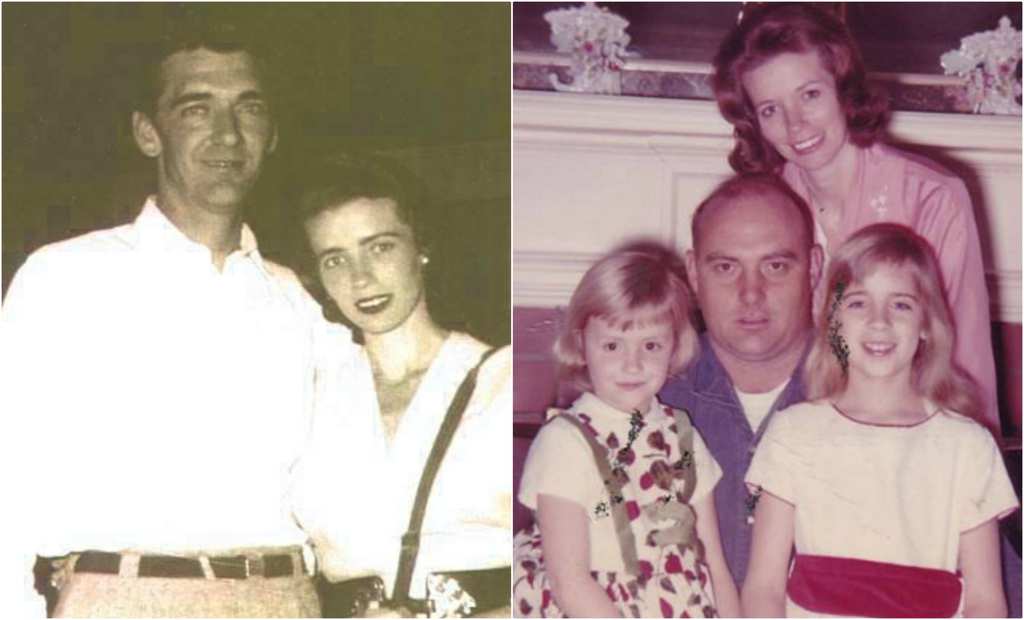 When Johnny Cash first met June Carter, he was still married to his first wife, Vivian Liberto. He had met Liberto while he was training for the U.S. Air Force. Despite having a long distance relationship, Cash tied the knot with Liberto shortly after his discharge. Having had four daughters together (Rosanne, Kathy, Cindy, and Tara), Cash and Liberto showed all the signs of a healthy marriage. However, not all was well and June’s arrival on the scene only sped up the inevitable… 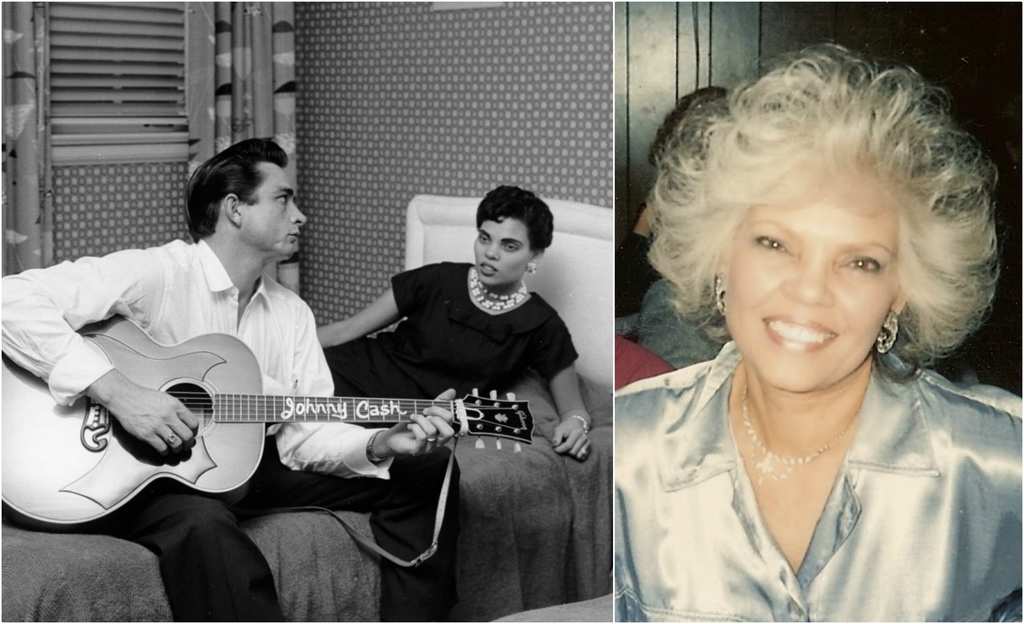 After 12 years of marriage, Vivian Liberto chose to file for divorce. Although her initial reasons were related to Johnny Cash’s reported substance abuse and affairs with other women, there was more to it than this. In her autobiography, I Walk the Line: My Life With Johnny, Liberto blamed June for the breakdown of her marriage to Cash. “I should have been relentless at saving [the marriage]” Liberto wrote. “As relentless as June was at destroying it.” She described the 1967 divorce as a “degrading, horrible experience.” 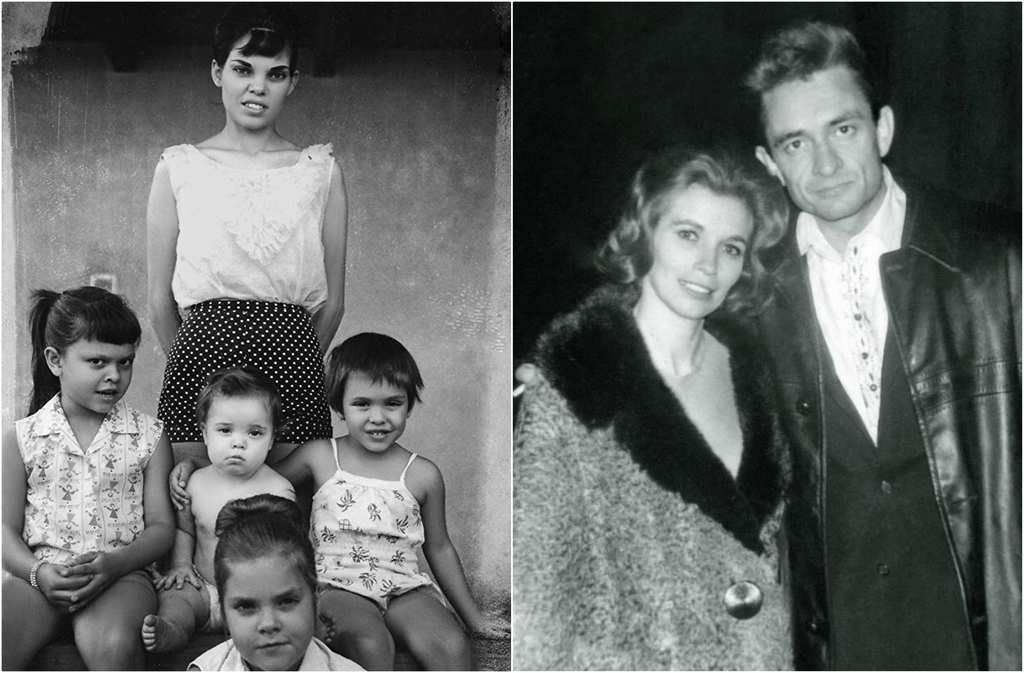 While every aspect of Johnny Cash and June Carter’s marriage appeared to be perfect, one person close to home was quick to shatter that illusion. Their son, John Carter Cash, gave a detailed account of his parents’ relationship in his book Anchored in Love: An Intimate Portrait of June Carter Cash. While he supported the idea that his parents were persistent and never gave up on each other, it is strongly suggested that Johnny had been disloyal to June on numerous occasions. 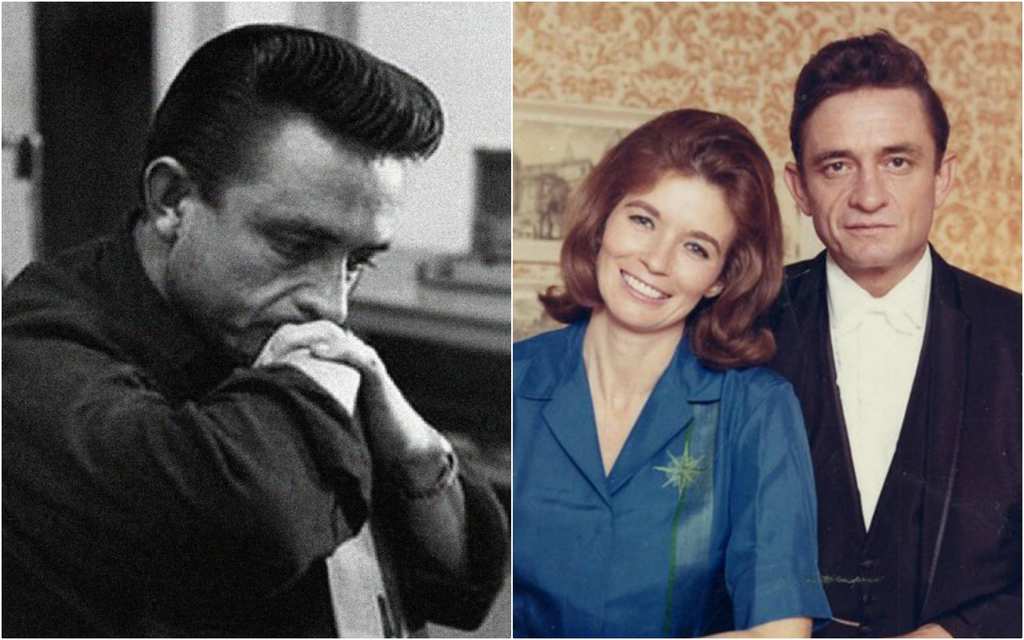 They Both Had Addictions

It wasn’t only Johnny Cash’s infidelity to June that their son shed light on in his book. While it is well-documented that the country singer struggled with substance abuse, John Carter Cash revealed that his mother also had a problem with prescribed medicine. While June was busy helping her husband get over his addictions, flushing substances down the toilet, she also had a nasty habit, overusing medication to cope with her paranoia that Johnny was being unfaithful. 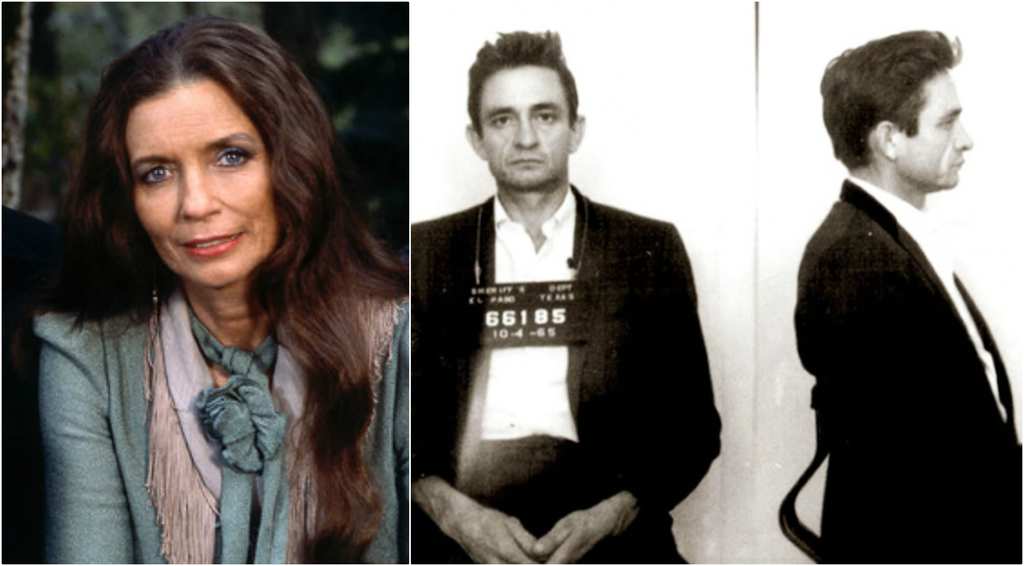 While they declared that their love was like a “ring of fire,” June put up some emotional walls to protect herself from getting carried away with Johnny. He was head over heels for her and desperately wanted to make her his wife. However, June wanted to temper expectations and keep things on an even keel while they were immersed in the world of music. In fact, Cash ended up proposing to Carter on numerous occasions and every time, she would simply say “No.” Until… 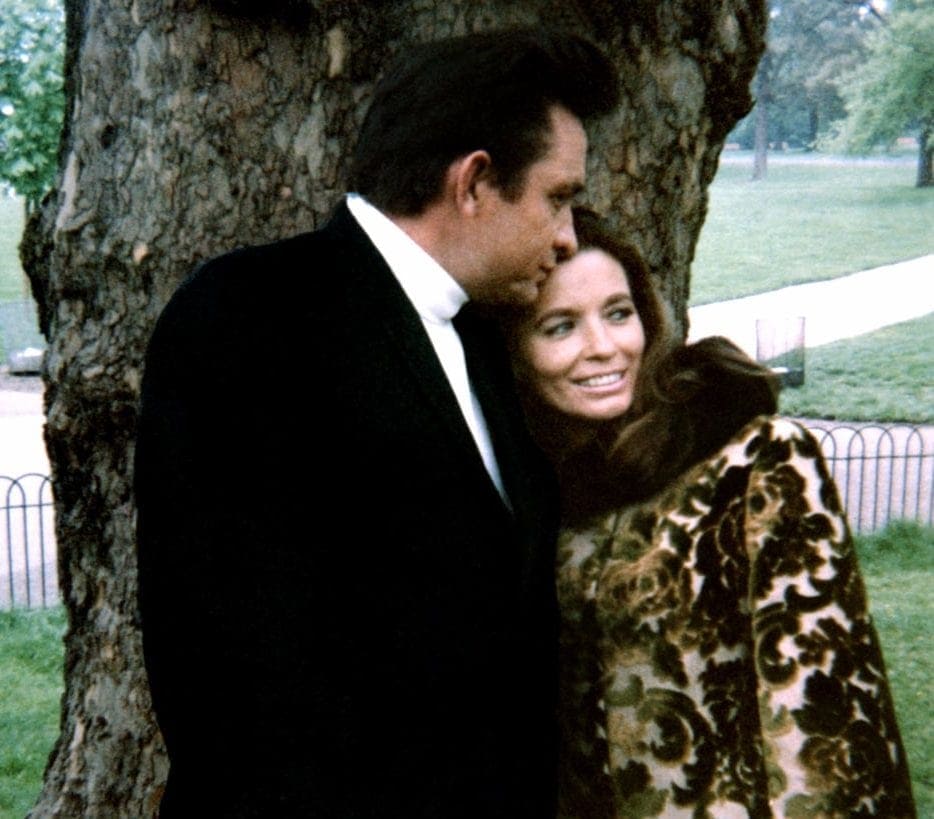 A firm believer that the couple was destined to be together, Johnny Cash refused to give up and pulled out all the stops towards the end of the ’60s. On February 22, 1968, the country singer proposed to Carter at one of his shows, in front of 7,000 people! The show, which took place in London, Ontario saw Cash get down on one knee in front of all of his fans and ask for Carter’s hand in marriage. Of course, the crowd erupted into cheers when June said “Yes.” 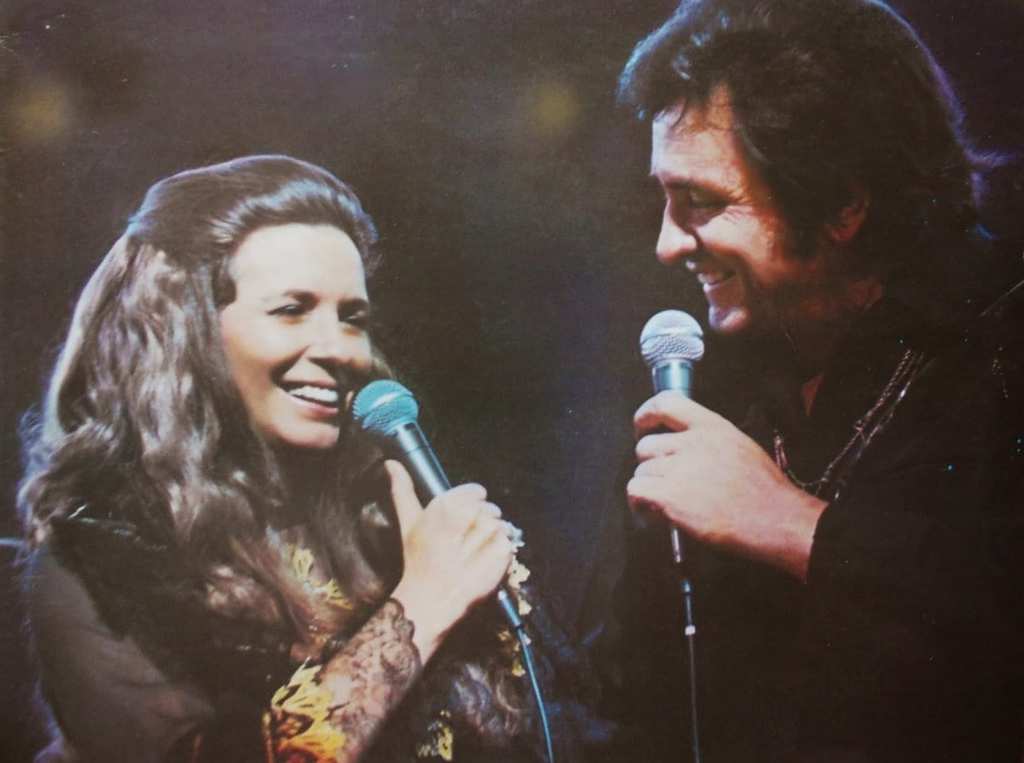 Match Made In Heaven

Just two weeks after Cash’s famous public proposal to Carter, the couple tied the knot on March 1, 1968, in Franklin, Kentucky. With the “Ring of Fire” co-writer Merle Kilgore as Cash’s best man, every aspect of the ceremony had meaning and purpose, from Carter’s blue dress to her hair’s matching flowers. Afterward, the family and guests drove over to Cash’s home in Hendersonville, Tennessee. It was here where the couple had a non-alcoholic reception and kickstarted their marriage together. 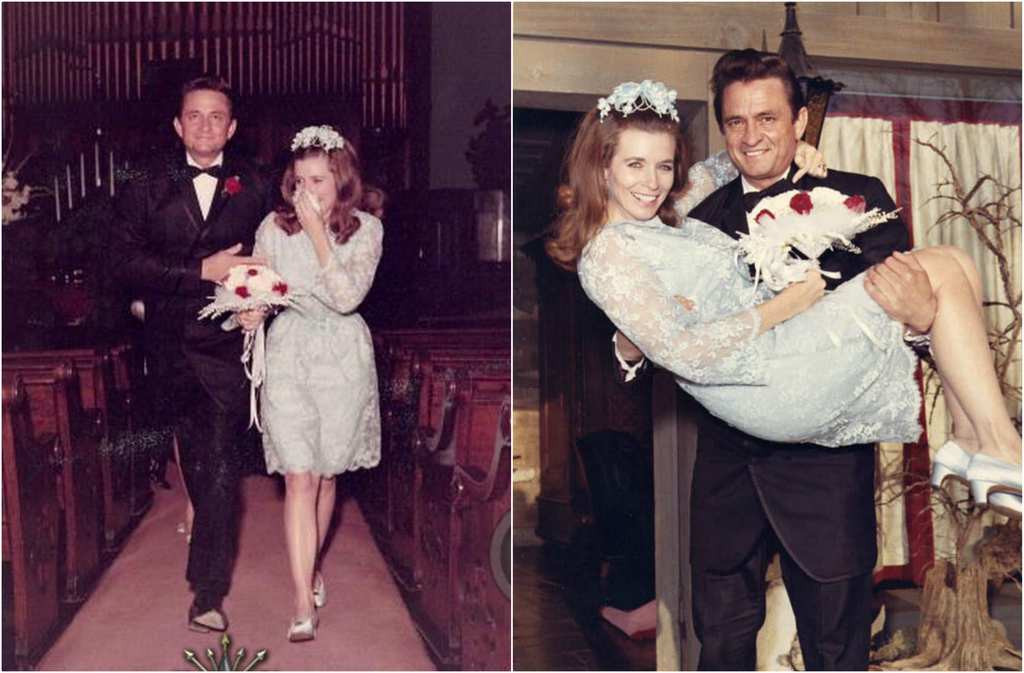 Bringing The Kids Together

While Cash and Carter both had children from previous marriages, this didn’t stop them from wanting to have offspring of their own. In 1970, a couple of years after tying the knot in Franklin, Kentucky, John Carter Cash was born. This meant that in total, Cash and Carter had seven kids. While June had two daughters from her previous two marriages, Johnny had four daughters with Vivian Liberto. They did everything in their power to make the seven kids feel like one big family. 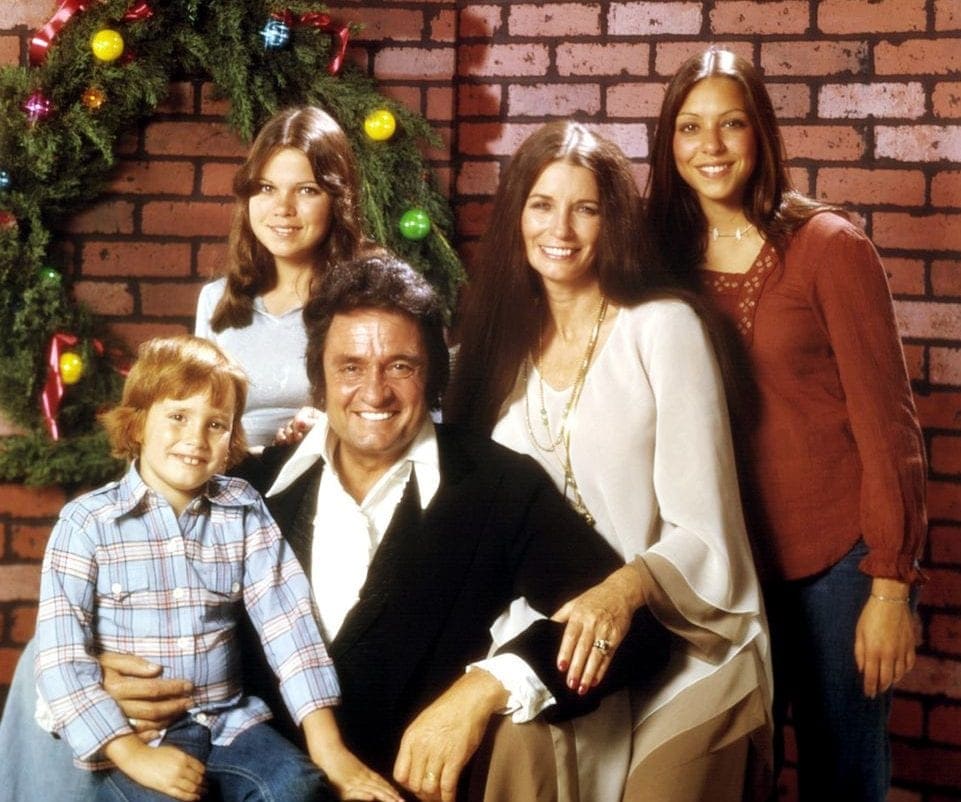 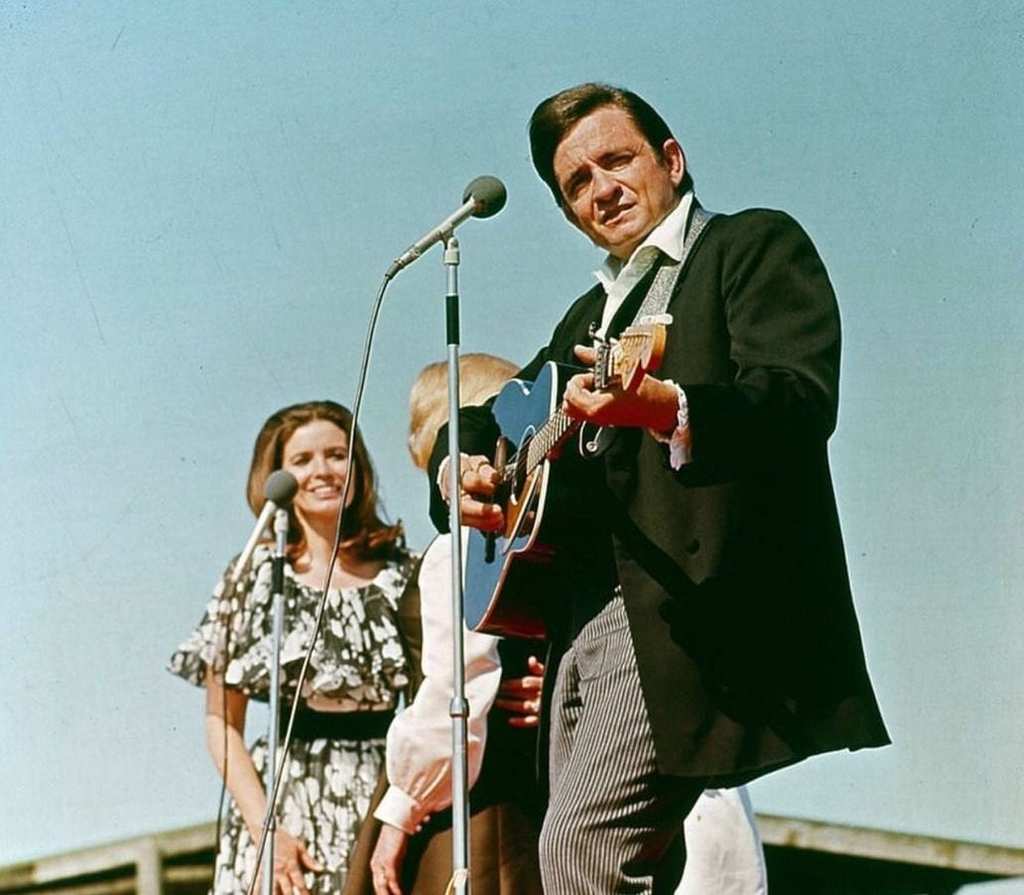 Religion Kept Them Together

While Johnny Cash’s relationship with religion was complicated, to say the very least, there is no doubt that this aspect of his life had a profound impact on his marriage with June. During the ’70s, the couple completed a Bible course at the Christian International Bible College. In fact, the couple would often sing religious-themed songs at Billy Graham Crusades. “The love that John and I share with our love for Christ is one of the most precious gifts God could have given us,” June said. 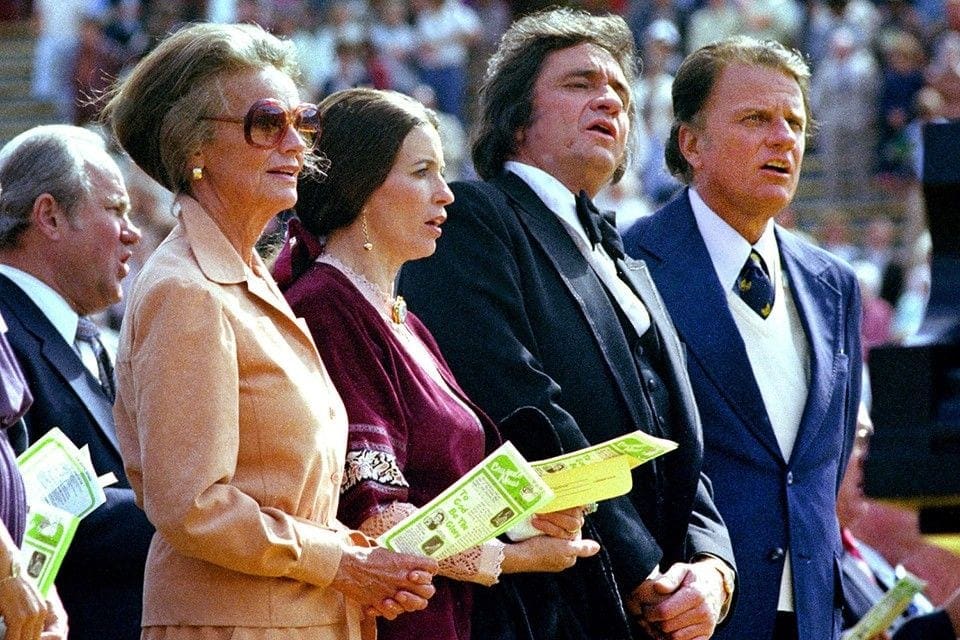 Close With The Carters

The truth is that Johnny Cash knew June Carter long before he ended up meeting her at that Elvis show. In fact, Cash actually heard June before he saw her, listening to her beautiful voice while singing with her sisters on a Mexican radio show. Then, after the pair met for the first time, Cash grew very close to the Carter family and performed with them on a number of occasions. They even recorded the record Keep On The Sunny Side together. 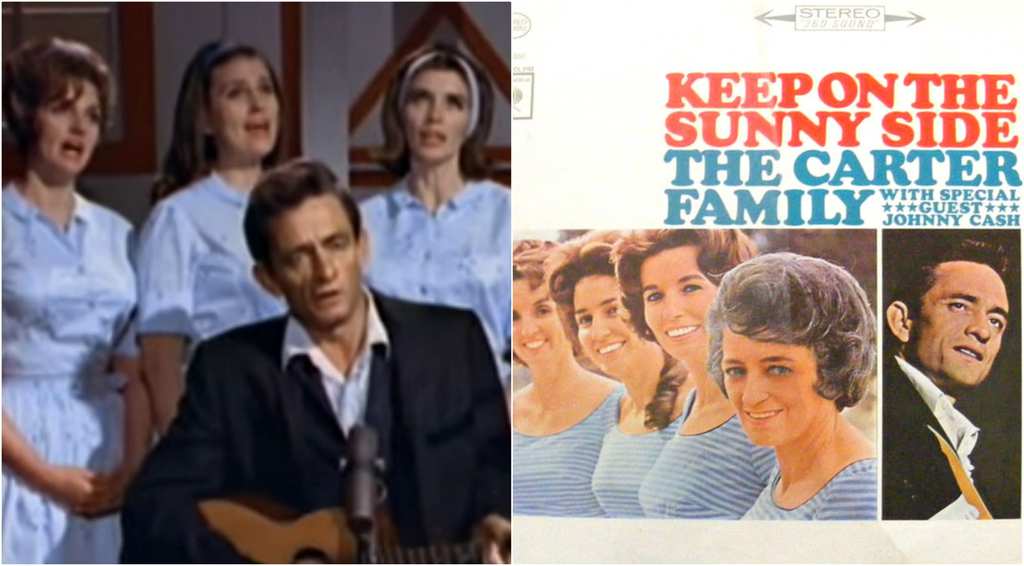 It wouldn’t take long before passions between Johnny Cash and June Carter reached an all-time high. In fact, June described falling in love with Cast as “[one of] the most painful things I’ve ever gone through in my life” and “a ring of fire – and I’m never coming out.” These sentiments were the inspiration behind the duo’s co-written classic “Ring of Fire.” It ultimately became one of Cash’s most iconic songs and June even ended up re-recording the song in 1999. 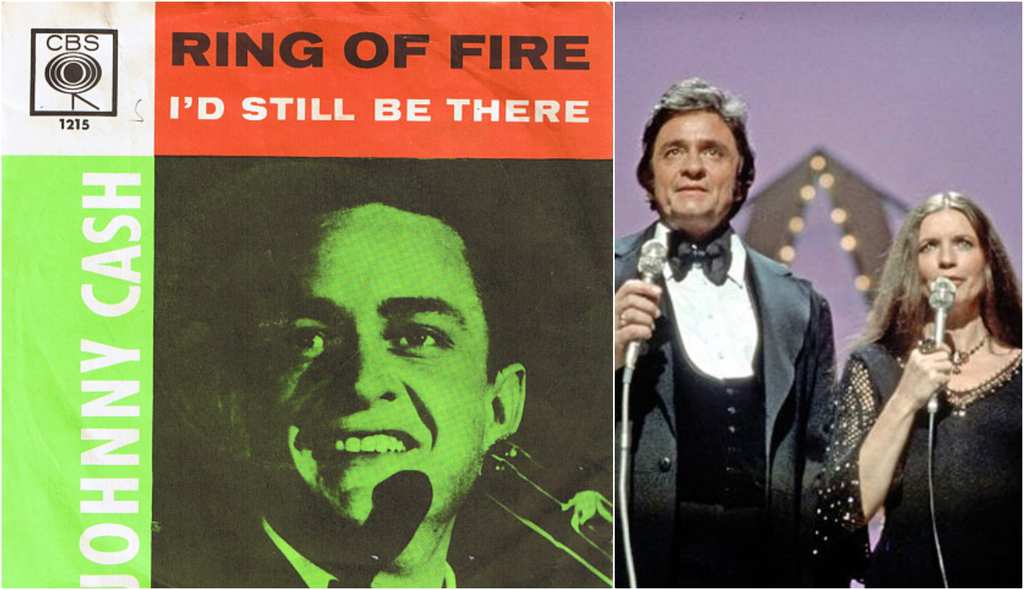 So Many Love Letters

One of the most special aspects of Cash and Carter’s relationship was the many romantic love letters they exchanged. For example, when June turned 65 in 1994, Johnny’s birthday message to her was voted as the greatest love letter of all time. Here is an excerpt: “Sometimes we irritate each other a little bit…But…I meditate on it and realize how lucky I am to share my life with the greatest woman I ever met…You influence me for the better…I love you very much. Happy Birthday, Princess. John.” 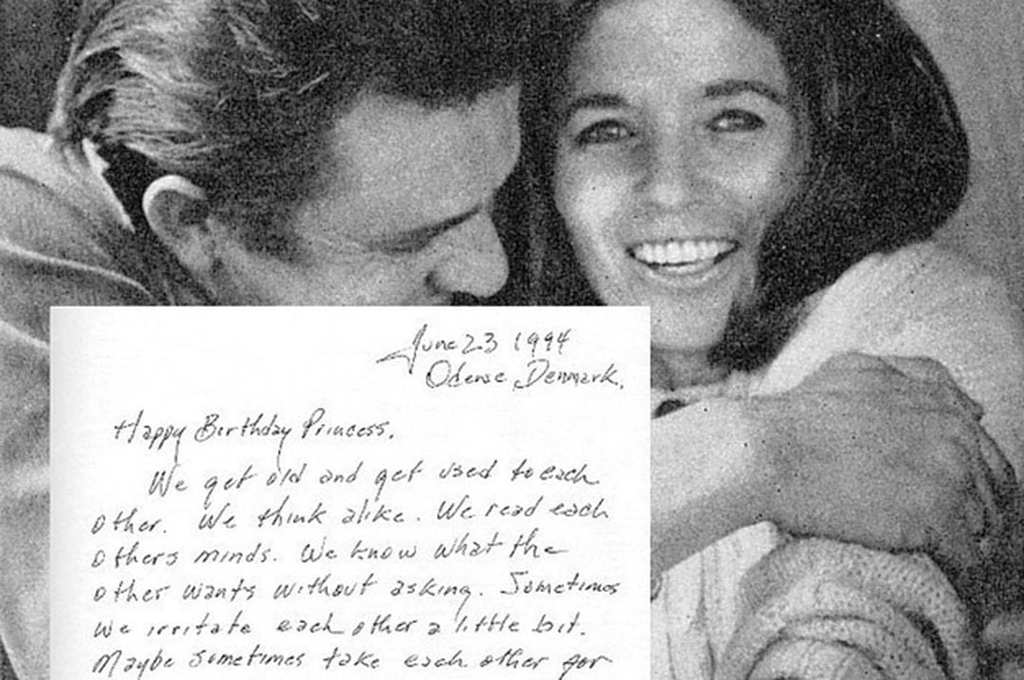 Although Johnny Cash and June Carter had already been in previous relationships, their shared story began way back in 1956, when they first met. Cash was still married to his first wife, Vivian Liberto. However, this wouldn’t stop him from locking eyes with June Carter backstage at the famous Grand Ole Opry in Nashville, Tennessee. The pair were instantly smitten with one another. Of course, the most interesting part about the entire moment was the fact that it was backstage during an Elvis show… 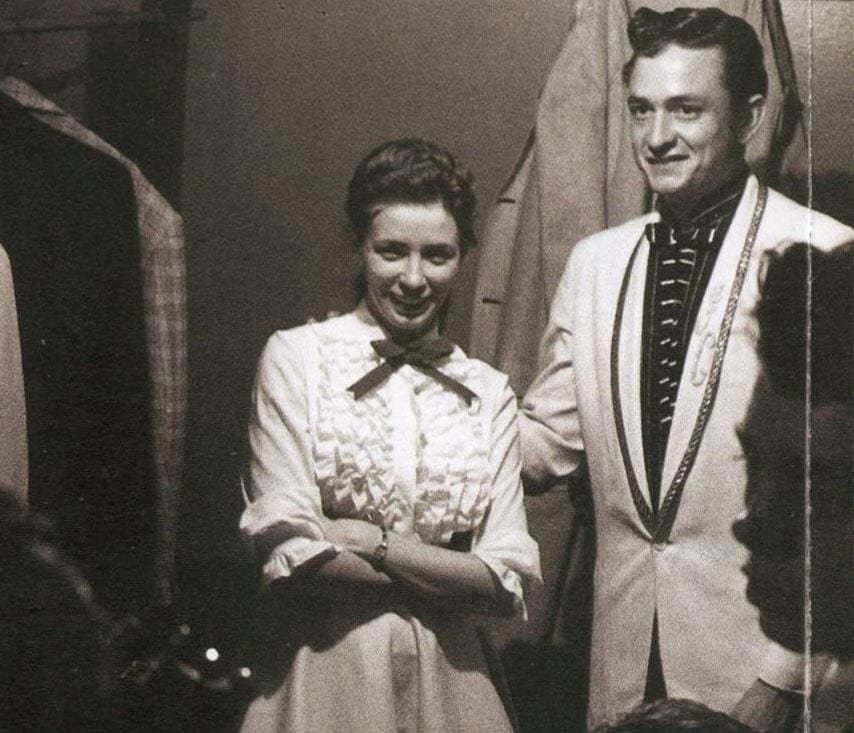 Despite not being that well-organized, Johnny Cash was known to have written a couple of lists in his time. One of the lists that surfaced happened to be a to-do list that not only highlighted some of the basic things that every human needs to do on a normal day, such as eating and coughing. It also mentioned things such as “kiss June” and “not kiss anyone else.” Amazingly, in 2010, that exact to-do list sold at an auction for a stunning $6,250. 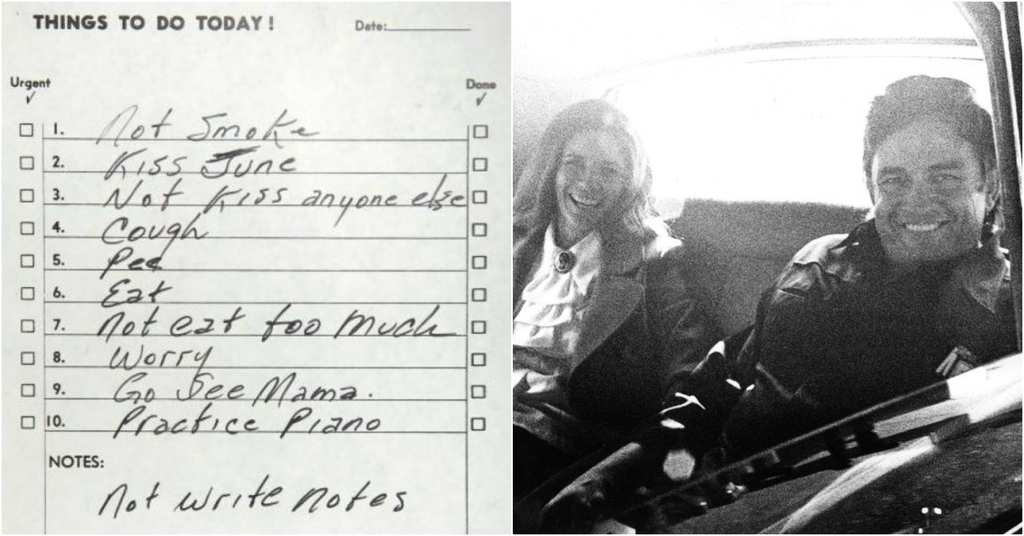 They say that all good things come to an end, and that couldn’t have been more true, as far as Cash and Carter’s marriage was concerned. On May 15, 2003, the happily married couple were torn apart when June passed away in Nashville, Tennessee. Although she died from complications after heart-valve replacement surgery, she was surrounded by those who were closest to her; most notably, her husband of 35 years, Johnny Cash. The heartbroken man held her hand until the very end. 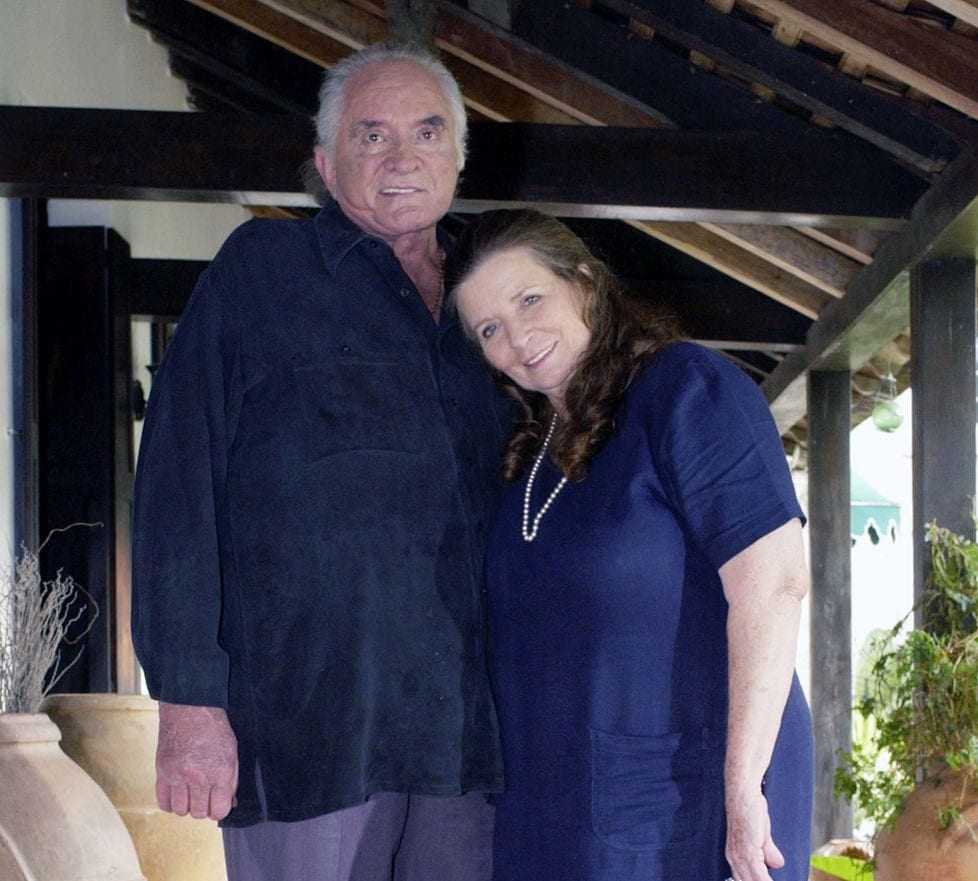 On July 5, 2003, Johnny Cash dedicated a show to his late wife in her loving memory. Before he sang their iconic hit “Ring of Fire,” he read the most heartwarming statement. “The spirit of June Carter overshadows me tonight with the love she had for me and the love I have for her,” he said. “We connect somewhere between here and heaven. She came down for a short visit, I guess, from heaven to visit with me tonight to give me courage and inspiration like she always has.” 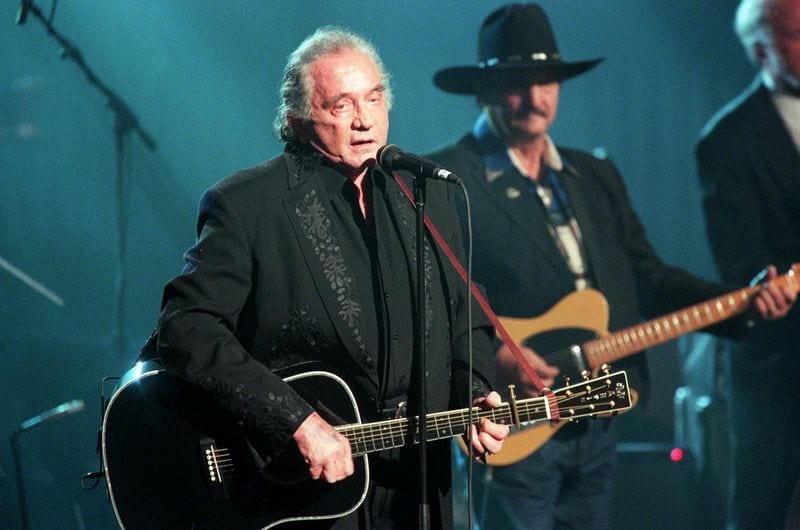 Heartbroken husband Johnny Cash had gone on the record saying that after his wife’s passing, his only other reason for living was his music. However, it turns out that the show in which Johnny Cash recited that beautiful message would be his very last. On September 12, 2003, just four months after losing his darling June, Cash also passed away from diabetes complications. Although both June and Johnny are no longer with us, their love will endure forever, for many reasons… 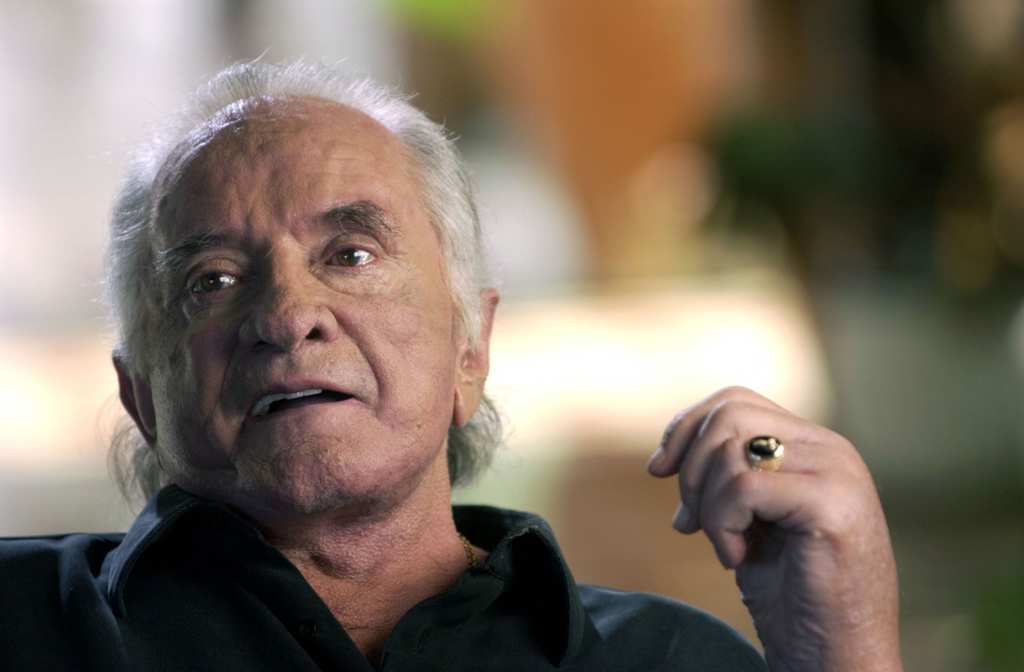 Brought To The Big Screen

Just two years after the passing of Johnny Cash and June Carter Cash, 20th Century Fox released a biopic called Walk The Line, which saw Joaquin Phoenix and Reese Witherspoon play the roles of Johnny and June, respectively. The movie focuses on Cash’s early life, his rise to fame, and his growing romance with June. Not only was the movie a commercial and critical success, but it also received five Academy Award nominations, with Witherspoon winning the award for Best Actress. 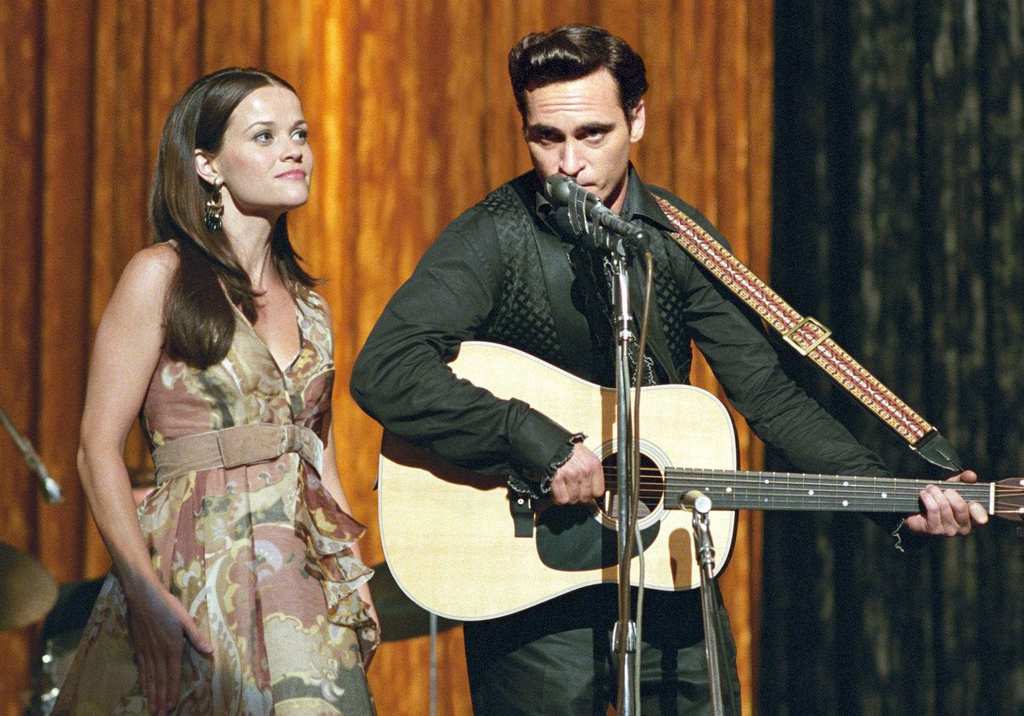 Their Love Lives On

To this very day, millions of people still enjoy the beautiful music that Johnny Cash and his wife June made together. With their son John also being a respected music producer, their legacy will truly live on. One thing is for sure though: Johnny Cash and June Carter Cash will go down in history as one of the most beloved celebrity couples. They proved that despite all the fame and fortune, two people can still maintain a long-lasting, beautiful relationship. 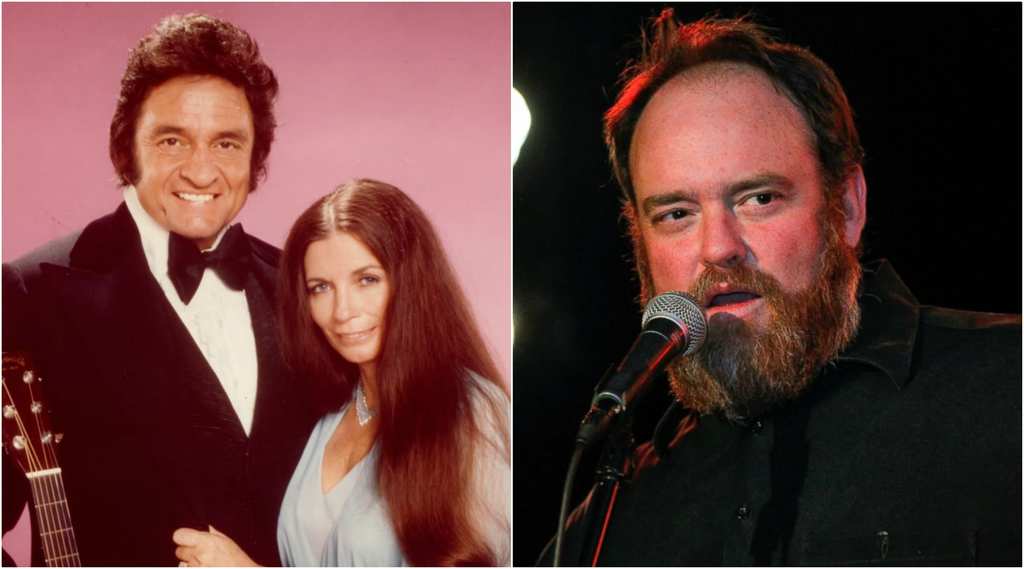 There’s nothing more exciting than watching your best friend say “I do.” There are happy tears, ...

Brands That Are Changing the Plus-size Bridal Industry

The average bride will need a lot more than just a wedding dress. They'll need an outfit for their ...

Why You Should Use Dried Flowers At Your Wedding

Planning a wedding often comes with a whole lost of things to do, with flowers being an important ...